Ecstasy is a recreational drug.

Ecstasy is supposed to contain the substance MDMA, but this is not always the case.1

What drugs does Ecstasy contain?

Sadly, a 2005 paper found that 61% of tested ecstasy tablets were adulterated with other drugs, in part due to the lack of regulation of the illegal market. And a massive 46% of Ecstasy pills contained 0% MDMA.1 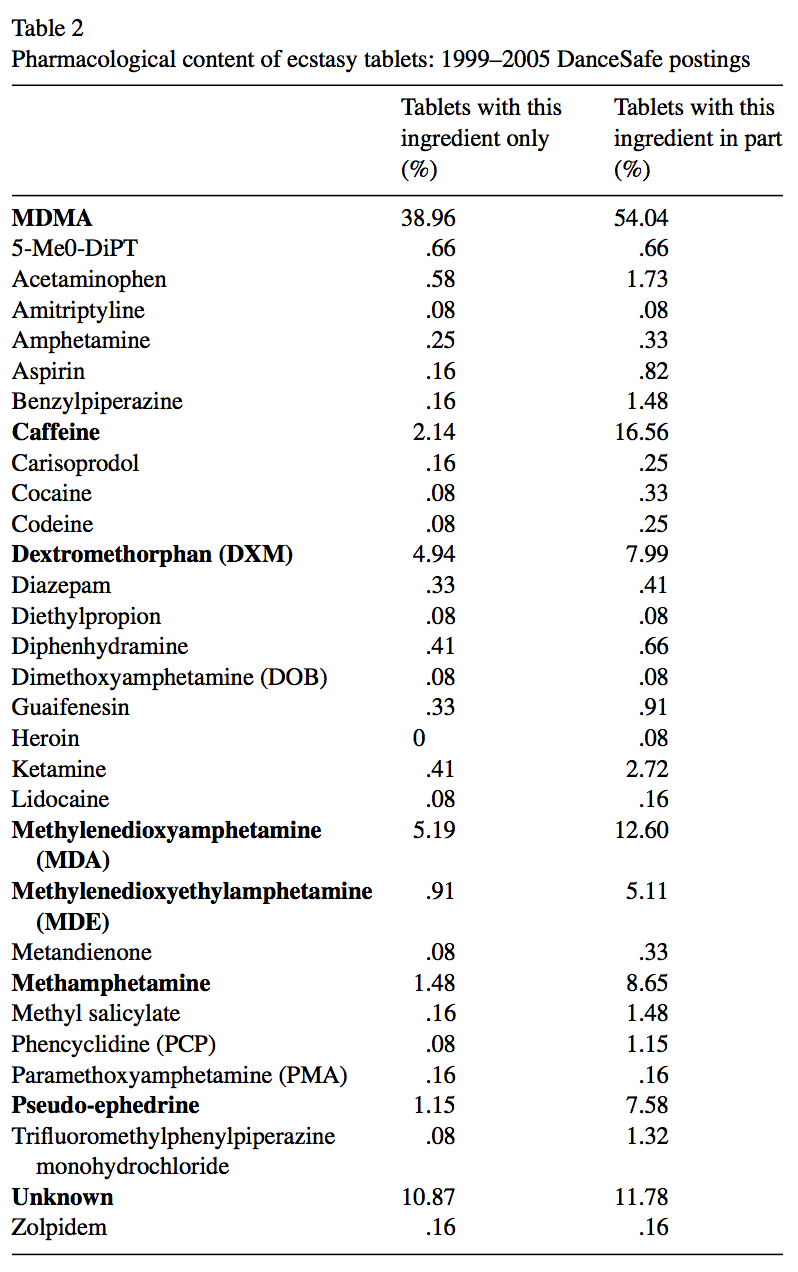 What are the biggest acute risks of Ecstasy?

See more at how to take MDMA.

Is Ecstasy (often containing no MDMA, or only some MDMA) safe?

Ecstasy, as consumed by people typically (i.e. often impure), is less safe than pure MDMA, and is perhaps a similar level of safety to horse riding.7

See this page for more info on side effects relative to other drugs.

Harm reduction expert Emanuel Sferios estimated that he believes there are around 20 Ecstasy-related deaths per year in the US, or about 0.0008% of users.

If Ecstasy contains only pure MDMA, is it safe?

“Before you go out seeking ecstasy or molly sold on the street to treat whatever ails you, you should be aware that while these substances may contain MDMA, they’re also mixed in with uncertain and dangerous adulterants. In laboratory studies, it’s only pure MDMA that has been proven sufficiently safe for human consumption when taken a limited number of times in moderate doses.”11

Is Molly safer than Ecstasy?

Molly might be less safe than Ecstasy - research suggests Molly may be even less likely to contain pure MDMA than Ecstasy. 87% of “Molly” analyzed by the DEA between 2009 and 2013 contained 0% MDMA, instead mostly containing “bath salts.”2

What does Ecstasy do to users and why do people take it?

The effects of Ecstasy depend on the purity and contents of the Ecstasy pill.

Pure Ecstasy, which should contain only MDMA, if “taken in a positive envrionment with a positive mindset, can make users feel like the world is perfect, with extreme euphoria, greatly enhanced touch and bodily sensations, and enhanced empathy and enhanced ability to have deeper and more understanding conversations with other people.”12 Some common side effects of pure MDMA in research for PTSD during use (~7 hours), are jaw clenching, heavy legs, lack of appetite, thirst, impaired balance, anxiety, and feeling cold.13

Typical Ecstasy pills, which often contain other substances seemingly designed to mimic the desirable effects of MDMA,1 may make users feel increased alertness, anxiety, and euphoria. Again, please note: “it’s only pure MDMA that has been proven sufficiently safe for human consumption when taken a limited number of times in moderate doses.”11

Where is Ecstasy used?

How many people use Ecstasy?

How could we make Ecstasy safer?

Treat it like driving. Accept that it can be dangerous in certain contexts (e.g. driving drunk, without a seatbelt, or speeding) and that people will do it anyway, and so educate people to minimize any risks.

Read the page on MDMA (Molly/Ecstasy).